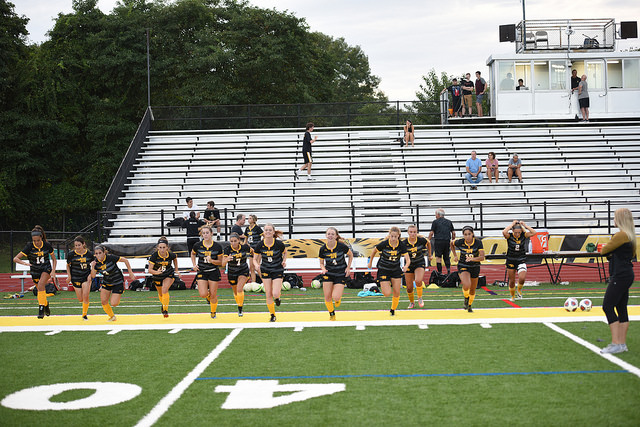 The Saint John Vianney Girls’ Soccer team defeated the Matawan Huskies 2-0 at home on Sept. 26. Both goals were netted by senior Jada Trotta, in the 3rd minute and 69th minute respectively. Trotta was assisted by her teammates Abigail Cieri and Natalya Spinks, scoring two head balls to lead the victory. The Lancers’ captain and goalkeeper, Erica Blackburn, made sure that Matawan stayed off the scoreboard and let nothing pass her line. Blackburn had just returned to the roster after missing the previous game for a dislocated shoulder.

With the eligibility deadline for the Shore Conference tournament approaching, the girls’ win against Matawan was essential. To compete in the coveted tournament, a team needs to have a minimum of a .500 record (an equal amount of wins and losses). Before Sept. 26, the girls were on a three-game losing streak following matchups with Middletown North, Somerville, and Colts Neck.

With their current 3-5 record, the girls now have hope for a spot. According to Coach Meehan, “At this point, we kind of have our back up against the wall, and we needed to win this game and then the next two to qualify for Shore Conference tournament. So we just came out here and took care of business.”

Captain Erin Gilfillan remarked, “I believe that all of us have been more focused on one common goal; and that is to win. We can’t just win because we want to, we have to work hard in order to earn a result. The past three games have lead up to tonight’s and each game we improve. We have played all 80 minutes of each game, taking it 10 minutes at a time. I see great things coming for us in the future and believe we can make it far.”

Spinks said, “We concentrated on giving a team effort in the game and we really worked together. We each did our part and worked as hard as we could which led to good results at the end of the game. As we go forward we just can’t lose focus or lose faith in each other, we just need to keep pushing forward as a team…Last night’s victory brought us one step closer to accomplishing our team goal.”

The team’s mantra this year is “Our Time.” According to Meehan, “it is from our seniors who have been part of the team for a couple years and want to show that this season is their season to leave a legacy. Every year the new seniors take ownership of the team.”

If you’d like to follow the team on its journey to the Shore Conference, their upcoming games are home against Wall High School on Oct. 2, at Ocean Township on Oct. 4, and home versus Red Bank Regional on Oct. 10.