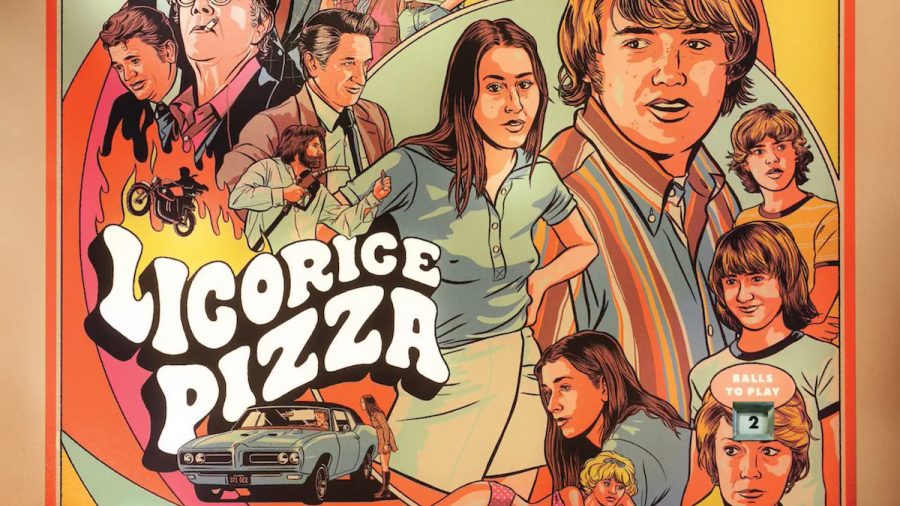 Paul Thomas Anderson continues his streak of incredible love stories disguised as period pieces with his ninth film Licorice Pizza. Showing the naive misadventures of Gary Valentine and Alana Kane as they explore first love in a changing world backdropped by the hazy and sunbaked San Fernando Valley in 1973.

The film is episodic in nature, broken up into various vignettes that push and pull our young lovers together and apart. These vignettes feature a slew of unforgettable and absurd side characters played by iconic stars. Bradley Cooper plays an often comically angry Jon Peters, while Tom Waits and Sean Penn make for an amazing and daring drunk duo- performing high-flying motorcycle stunts.

Licorice Pizza is Anderson’s most overtly romantic film since 2000’s Punch Drunk Love, and that is no doubt in part due to the fabulous leading performances from Alana Haim and Cooper Hoffman.

Hoffman’s Gary Valentine is 15 going on 30 while Haim’s Alana Kane seems to be stuck at 17, although she swears she’s “25.” The film beautifully explores their budding romance through Gary’s multiple wacky entrepreneurial ideas including a waterbed business and pinball arcade. There is a recurring motif of breathtaking shots that showcase our young lovers running through the streets of the San Fernando Valley, adding a brisk pace to the film’s two-hour and fifteen-minute runtime.

Like all of Anderson’s prior works, the cinematography and camera work are excellent. The film radiates a warm and fuzzy feeling akin to that of first love. It’s nearly impossible not to crack a smile at the sharp writing or sheer cuteness of some of the scenes. This really feels like a back-to-basics movie for Anderson, a love story set in California with a dash of tragic Americana. Licorice Pizza is a must-see when it hits theatres this Christmas.