On Oct. 25, 2021, Saint John Vianney’s Girls’ Volleyball Team (second seed) faced the top team in the division, Donovan Catholic. This game would determine which team would come home with the Shore Conference Title.

The tournament took place at Georgian Court University in Lakewood, New Jersey. Their gym held quarterfinals, semi-finals, and championships with schools from all over New Jersey.

The Lancers played the Donovan Catholic Griffins in their first game of the season in early Sept. where the Lancers lost in a close three-set game.

“We came back and we wanted to play them again. We came back fighting. We have such a connection with everyone and this was our year. We always knew this team was special.” said senior libero, Marina Millet.

Senior captain, Erin Gretzky, shared, “The first set definitely took a toll on my confidence. However, as I sat down on the bench before the second set, I reminded myself just who I was and who my team was. I instantly was confident in our abilities to win and to be champions.”

Between sets one and two, senior Kennedy Mayo, also captain, shared that Coach Gadaleta gave her a quick but essential pep talk.

“The next set starts over again at 0-0… the only point that matters is the next, forget everything that happened before, but remember the changes you need to make,” said Coach Gad.

This boost gave Mayo the push she needed to have a “momentum-changing block” that ultimately put her team back in the game. That would not have been possible without those important words of support.

The most successful teams come together through the relationships the players build with each other. “I have never been on a team where we were all best friends. On and off the court, this team is my family.” shared Gretzky.

The second set ended and SJV came out on top with a 25-20 win, which tied the match. SJV was back in the game and did not stop until they could call the title their own.

The biggest underlying support the Lancer’s had was the power of their fans cheering from the stands. 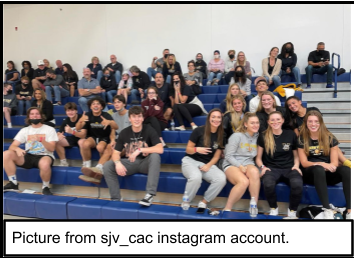 “For so long, we have competed in empty gyms because of COVID, so to be able to turn around behind the bench on Monday night and see the excitement from our students and parents, only increased our desire to compete hard,” said Coach Gad.

“We are so grateful to the SJV community for showing up and getting rowdy in support of the team!”

In the final set, the score was 24-17, SJV, and Donovan had the serve. The ball went over Millet’s head and landed right over the line. The Lancers had won the game 25-17 making SJV the 2021 Shore Conference Champions.

“When I saw that serve go long, I definitely felt a sense of joy. I actually didn’t think it was out, so I thought they were going to get the ace, but my libero, Millet, knew better and made a really athletic move to avoid the contact. After that, it was time to celebrate!” said Coach Gad.

And she was right. What better way to celebrate a win than to run out onto the court with your team?