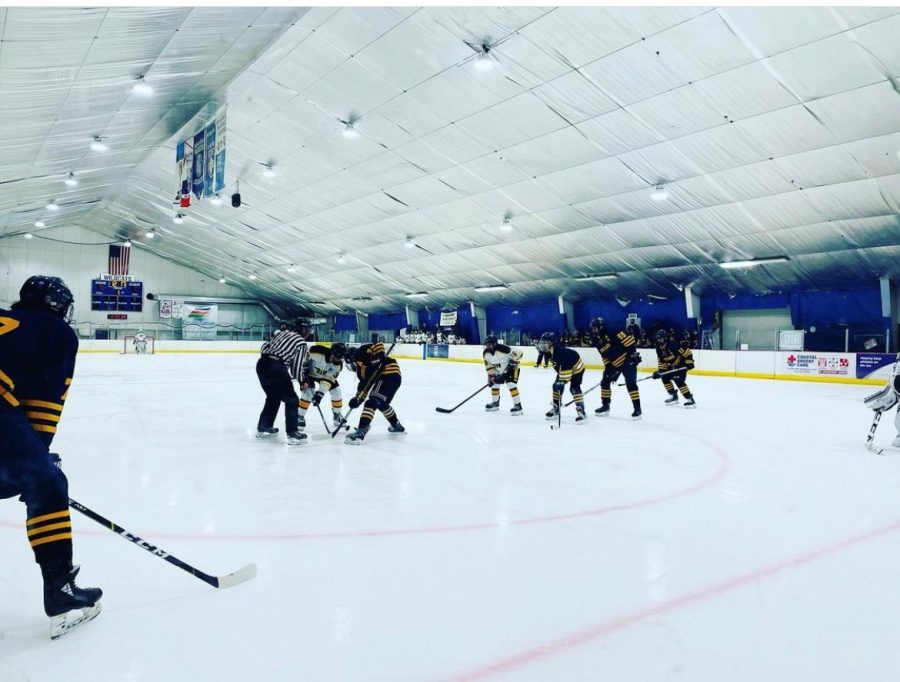 Tuesday, Nov. 30, 2021, Lancers had their home opener at JSA against Marlboro.

The starters for Marlboro were not specified, however, their goalie was number 29, Dimitri Kapranov.

The first couple of minutes it was around equal possession for both teams. With 10:37 left of the first, Reed scored off a pass by Pat Haines making the score 1-0 with ten minutes for Marlboro to make a difference.

With 4:30 left in the same period, Marlboro player, Ryan Kapp, served a penalty for too many men on the ice. This led to a two-minute penalty with four men on the ice until the time is served.

Marlboro can’t catch a break, as with 10:13 left the goalie gets a penalty for improper equipment. The ref was fed up with the goalie Kapranov after giving him several warnings for no mouthguard until he actually called the penalty. However, goalies are unable to serve penalties, so number eight, Kapp, served yet another penalty.

Lancers player, Sean Petrovich, served a two-minute penalty with 7:43 left in the second for an interference call.  Following this, with 1:28 left in the second, Dakota Vastola scored by a tip with a shot from Calice. Making the score 2-0 with a little over a minute left.

With 51.8 left in the period, Danny Greenhall scored penalty number two for SJV by a hooking call. This penalty was for two minutes, however, will have to be served into the third period. The score going into the third remained 2-0, SJV.

12:42 was left in the third when Marlboro player number 21, David Mard, gets a hooking call; serving a two-minute penalty and wouldn’t be able to come out of the box until 10:42.

In an effort for Marlboro to save the game, or even put a point on the board, the coach called for a timeout with 2:03 left. When the timeout was over, Kapranov was pulled, giving Marlboro an extra player on the ice (6v5). However, this did not end up helping Marlboro, and with 57.5 left in the game, a fight with senior Calice almost broke out by the SJV team bench.